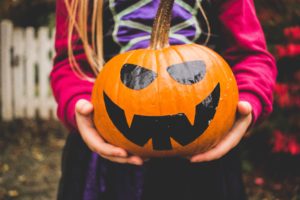 Saturday turned out to be the perfect day for the pumpkin patch…  It was our first time going to Maris Farms and it definitely won’t be our last!  Abby had a blast fishing for trout, petting the animals, watching the duck & piggy races, roller racers, zipline, jumping pillow, tug o-war, corn maze, and the giant slide!  My BIG KID even had a blast in Destruction Zone on the paintball safari ride & the corn shooter!

Abby decided carving her pumpkin would be too hard, so she decided to paint instead. And I must say… she did an AMAZING job!  Marc on the other hand, thought her pumpkin was going to turn out crazy messy. *rolling eyes*  I love how creative and artistic she is!

Trick-or-treating was a huge success this year!  Unlike last year, where we were done after about 5 houses & SOAKED!?  We managed to spend over an hour trick-or-treating with a group of neighborhood kiddos.  It’s so refreshing to know that we live in an area that is so welcoming!   There were tons of trick or treat-ers walking the streets that night.  Coming from a neighborhood where we had to drive from house to house and were lucky to get a single trick-or-treat… It’s pretty AWESOME that for the first time, Abby was able to trick-or-treat with schoolmates, knock on doors of neighbors we know and love, and handout candy and see other classmates’ costumes!